New Electric Car – If you can get yourself down to London today before 8pm you have a chance to try the new Smart Electric Car which was officially  released in the UK back in 2012.

This is part of the Smart Urban Stage, a temporary exhibition which asks the question ‘What will the future be like in urban areas and how will we move around?’

The Smart Urban Stage exhibition has visited six European cities over the course of the last year (Berlin, Rome, Zurich, Paris, Madrid and London). In each city people have competed for the Smart Future Minds Award, with a €10,000 prize being given to the most innovative project in each city.

The exhibition has seen ideas from experts and thinkers in fields such as society, design, architecture, media, science and mobility. Each trying to deliver sustainable ideas relating to the future of urban life.

As part of this exhibition, Smart have also been offering test drives of their new electric car, the Smart Fortwo. As anyone who has sat in their big car watching one of this little vehicles fit in the most ridiculously small parking spaces (sometimes end on to the pavement!) these already definitely make sense in the urban environment. And now an electric version too. 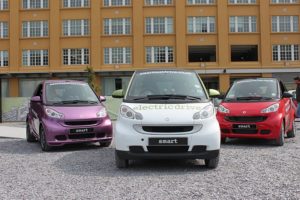