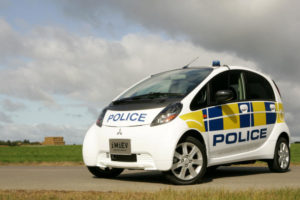 Not the band, I mean your bobby on the beat! Mitsubishi showcased the first all electric police car at the National Police show back in September 2009.
The i MiEV has been trialling in the UK for almost a year now but it was launched at the show in full police markings. With a top range of 100 miles, a top speed of 81mph, room for 4 passengers and kit it could be ideal for urban policing. Mitsubishi Motors say they have been inundated with requests from UK Police Forces to trial the i MiEV. The first full-production i MiEVs arrive in the UK has arrived in November 2009 and were on the road in December 2009. West Midlands Police was the first force to run operational i MiEVs.