The main power for the charging points comes from electricity generated by Ecotricity.

« When we talk about Green Energy, we mean electricity and gas made from renewable sources – we mean Green Electricity; made from the elements, the Wind, The Sun and the Sea – and Green Gas; made from food waste and from algae. And we don’t just supply Green Energy we make it ourselves. »

Sounds all very good. Ecotricity claims to be Britain’s leading green energy company, founded in 1996 when the idea of green electricity was pretty novel. Ecotricity do generate their own renewable energy, at the moment, but this is pretty exclusively from wind turbines (although they do intend to bring solar on line). It generates enough to power 50,000 homes and businesses in the UK from 52 of it’s own windmills. It also buys renewable energy from other generators to supply customers. However the provision of 100% renewable energy is an aim not a reality at the moment. 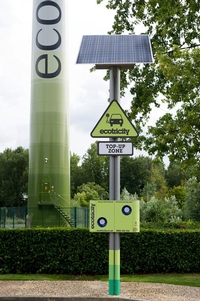 As with all UK energy suppliers, Ecotricity have to declare their fuel mix on an annual basis and this information is publicly available. The fuel mix for Ecotricity from 1st April 2009 to 31st March 2010 is shown below.

So that’s actually 41% green (renewable) and 59% brown (fossil fuels). This is significantly better than the national average at 93.4% brown and 6.6%. However, if it is done in the standard way, the power going to the charging points will be this same mix, this is unless each charging point is going to have a dedicated wind turbine? Currently the solar panel included is described as for additional charge.

This is an important step forward in the provision of electric car charging infrastructure, certainly in terms of availability. We’re keen to find out the exact details of the renewable energy supply.

Double socket
Each socket is equipped with an MCB/RCD circuit breaker which can be reset by the user; illuminated display shows that breaker has been tripped
Motorized flaps protect against dirt, unauthorized access and vandalism
Non-slip safety covers
Integrated RFID reading system for each socket, RFID antenna integrated into protective cover.
Internet connection through GSM or LAN
Colour LED system shows status of modules
Hardware ready for future PLC communication
Housing made of polished stainless steel
Cover plate made of aluminium, powder-coated in RAL 9007
Mast mounted with standard connection box, including fuse protection (2xE14) and terminals(max. 16mm2), modifications upon request
Lockable standard inspection opening in mast
Mast diameter 0.2m (7.9in.), mast height • 3.20m
Under the ‘Plugged-in car grant’ scheme which came in Jan 1st 2011, buyers of new electric cars are offered up to 25% off the car’s price, capped at a maximum of £5,000. There are now 10 first generation electric cars eligible for the grant, such as the Nissan Leaf, Mitsubishi i-MiEV and Telsa Roadster sports car. Charging them with electricity generated from natural resources gives the added benefit of even greener motoring.